64 Million Eat Out To Help Out Meals Claimed 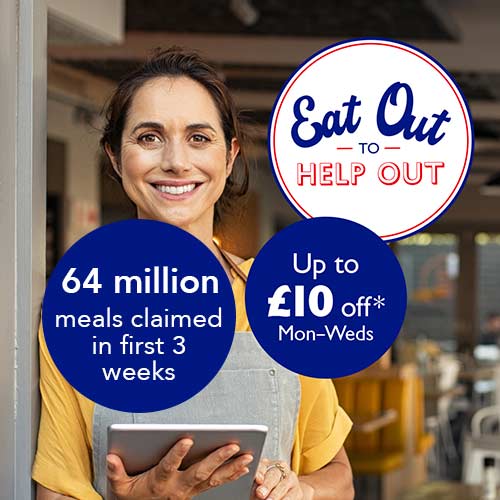 The Eat Out To Help Out discounted meal scheme ushered in to support the hospitality industry was launched on August 3rd. The scheme runs for 3 days a week, Mondays to Wednesdays and gives people a 50 percent discount on meals up to a maximum discount of £10 per meal.

Newly released statistics show that in the first week, which is the first three days of the scheme going live, 10.5 million meals were discounted under the EOTHO scheme. The following week saw a sharp increase with 35 million meals discounted.

87,000 claims have been submitted by companies signed up under the scheme for rebates under scheme. The online service to help the public find restaurants participating in the scheme has seen 13 million users make 34 million searches across the first three weeks of the scheme.

The scheme has been a success as far as the Chancellor's intentions, which were to drive customers to businesses that were particularly suffering due to the pandemic. OpenTable, an online restaurant booking service, showed data confirming the number of customers at restaurants was 61 percent higher than the same period last year (data was from Week 3 of the scheme, August 17th-19th). In the first two weeks there was still an increase in customers year-on-year at 12 percent in week one and 41 percent in week two.

There appears to be benefits even outside of the discounted days as restaurants show customers counts 17 percent up compared to the same week last year.

The Chancellor Rishi Sunak has praised the effectiveness of the scheme and reiterated the intention to protect the jobs of the near 2 million hospital industry workers. 80 percent of hospitality industry companies stopped trading in April and the industry sector has the highest number of furloughed staff at 1.4 million employees.

The EOTHO scheme can save up to £40 of the bill for a family of four according to our Eat Out To Help Out Calculator, as each person has their own discount.

Eat Out To Help Out comes to an end at the end of August, with today (Wed 26th Aug) and Monday 30th August being the remaining days.

People can still enjoy the VAT cut, from 20% to 5%, which lasts until January 12th 2021 and applies to businesses in the hospitality sector. A saving of £1.25 for every £10 normally paid at the till.