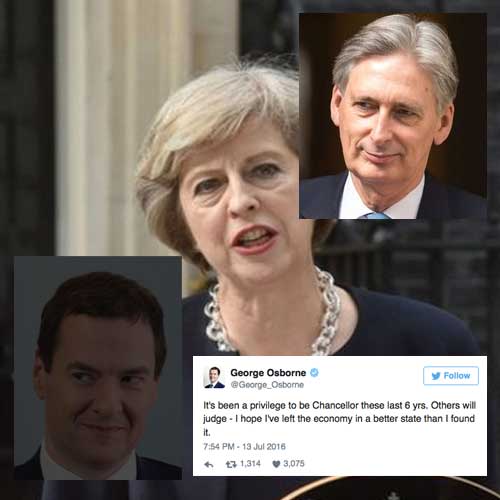 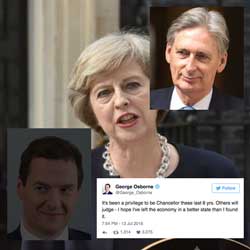 New Prime Minister Theresa May started her cabinet reshuffle today by appointing a new Chancellor after yesterday's shock resignation of George Osborne. Rumoured to be facing a demotion the anti-Brexit Chancellor decided to step down and leave the Government altogether rather than face a smaller role. The pundits top pick for his replacement was the Secretary of State Philip Hammond - and today he has been given the role.

Prior to the EU referendum, George Osborne sided with Former PM David Cameron on remaining in the European Union and campaigned by stating taxes would have to rise to combat the loss of revenue to the Treasury. Initially there was uncertainty about this but post-referendum the former Chancellor remaining tight-lipped on the matter, only stating that he would like to shore up the UK's position by reducing corporation tax to 15 percent or less to invite business to settle here.

Now that both Cameron and Osborne have gone, what is the new Chancellors stance on all of this?

Osborne famously said that UK families would be worse off by over £4,000 a year post-Brexit but this was ridiculed. Philip Hammond was part of the 'scaremongering' in the campaigning stage, but has already stated that there will be no emergency budget and the regular Autumn Statement in December will deal with any budgetary adjustments.

Working alongside Mark Carney and the Bank of England, Hammond intends to use the remaining Summer period to gather up the financials and deal with all the scenarios before making firm decisions in the late Autumn. David Davis, who was handed the new role of 'Brexit Secretary' - and well known as a 'eurosceptic', will likely be pivotal in decisions as his work on negotiations with the EU will be a major factor on the Budget decisions we see.

Hammond believes that although initial shocking devaluation of the Pound and the stock markets was rough, there has been an calming effect through the fast appointment of a new PM and re-organisation of the Government. Hammond studied Economics at Oxford and was a career businessman prior to his role in politics. He was director of a number of medical equipment companies in the late 70's/early 80's. In the 90's he became involved in numerous business interests across sectors from home building through to oil and gas.

Whatever decisions Hammond makes will be reigned in by the PM Theresa May and she has previously voted as follows:

They seem to agree on issues aside from that of reducing corporation taxes so what happens here will be interesting. George Osborne had already placed a target corporation tax rate of 17% by 2020 (this was before the post-Brexit aim of < 15%) and abandoned plans to beat the budget deficit by 2020. So far May's plans seem to follow these but anything can happen over the coming months.