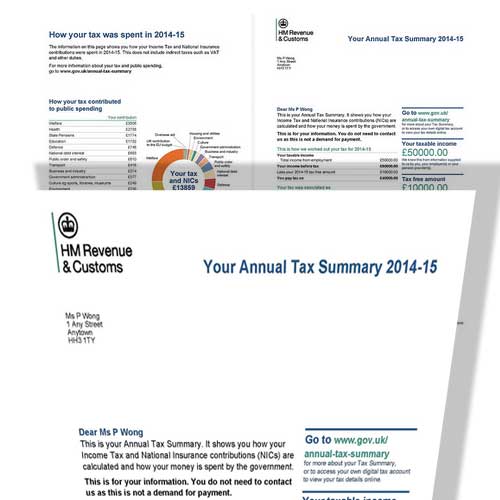 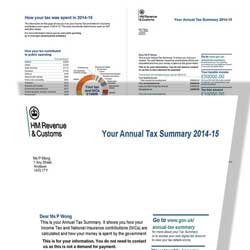 Covering the tax and national insurance paid during the 2014-2015 tax year, which ran from 6/4/14 to 5/4/15, the statements are the second batch to be sent since their introduction last year. Individual taxpayers can expect to see a breakdown of the income tax and national insurance contributions made, alongside a categorised breakdown of Government expenditure utilising the collected income.

Interesting points to note from the expenditure lists are increases in healthcare and pensions spending as well as the not insignificant amount paid in interest payments on the UK debt pile. However, the interest payment percentage actually has fallen year on year due to the lowered amount of debt remaining - apparently saving £2 billion in interest during the fiscal period.

As the statements were an openness pledge by the then newly re-elected Government, the opportunity to gather research on the first batch was not missed and showed 80 percent of people receiving statements found them to be useful in understanding how tax works and where the money goes.

Whereas PAYE taxpayers receive statements by post, the Self Employed are able to login to their tax account with their credentials and view them online. Treasury Secretary David Gauke states an extra 3 million taxpayers are to receive summaries this year.

All roads lead to the adoption of a Digital Tax Account for every taxpayer. Statements this year will contain information on how to create the account with the Government hoping to hit targets of 5 million business and 10 million individual tax accounts by early 2016.

The Government Stake in Lloyds and How the Taxpayer Fares7 views

National Living Wage To Rise In April 2020, But Is It Enough?6 views

Personal Allowance and Higher Rate Threshold May Freeze After 2020715 views

National Living Wage To Rise In April 2020, But Is It Enough?539 views

How Much Would You Need To Earn For Your Dream Lifestyle?477 views