After the announcement of a further share sell-off, we examine the total spent and recovered bailing the bank out. 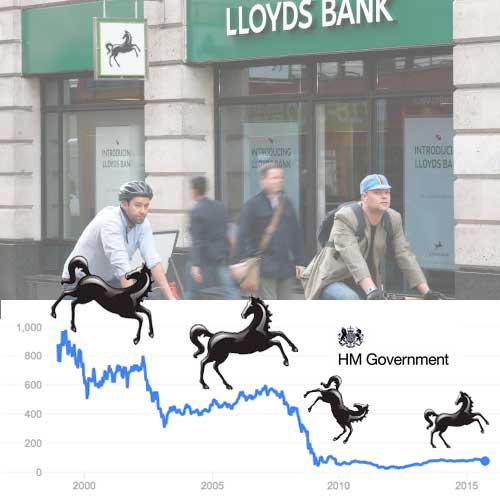 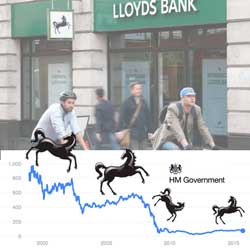 The Government committed to purchasing a 43.4% stake in the Lloyds Banking Group six years ago. In 2009 as part of a broader restructuring that saw the group's operations split up, the then Labour Party leadership paid around 74 pence per share to 'buy in' its shareholding. The total amount spent was just shy of £21 billion.

The news at the dawn of 2010 was that Lloyds shares were closing at 50.69 pence - a loss to the taxpayer at the time of a third of the value or £7 billion. An amount that would only be recorded if the incoming Conservative Government were to have sold off the shares to raise capital.

In April of this year the Chancellor first made known his intention to begin selling off the Government's interests in Lloyds. A part of his election promise was to provide discounts on share purchases to small public investors. At the time of this announcement, £9 billion worth of shares or just under half of the holding had already been sold off. It was the remaining 22 per cent holding, of which some would be allocated to the public with a discount on purchase equivalent to five percent of the market value.

Today's announcement states that so far £15.5 billion has been recovered of the initial £ 21 billion spent. The Government still owns 11 percent of Lloyds worth around £6 billion at current prices. From this amount at least £2 billion will be available to the public at a discount of 5% (worth nearly 4 pence per share). In addition, those who hold on to their shares for at least one year will receive a bonus share for every ten purchased.

More information is available at gov.uk/lloydsshares as well as the opportunity to register interest as a prospective purchaser.

How Much Is Your Fifth SEISS Grant?211 views

How Much Is Your Fourth SEISS Grant?10 views

How Much Is Your Fifth SEISS Grant?14,377 views

How Much Is Your Fourth SEISS Grant?484 views