Would A Flat Rate Tax For The UK Work?

Would A Flat Rate Tax For The UK Work? 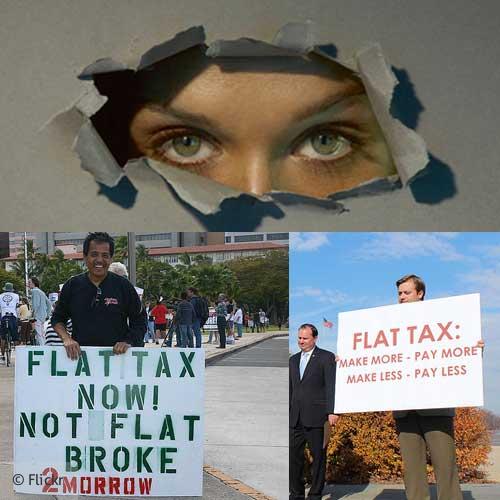 Everyone would like to pay less tax - well actually no tax, but that's not going to happen. What we would settle for is a fairer taxation system and that is something everyone would agree on. But how?

One rate for all

It's been a election point for some time, but never actually made law. In the UK the right wing are the only ones to flirt with the idea. The Conservatives currently are attempting to align Income Tax and National Insurance, and provide a simple £10,000 personal allowance for all - this is simpler and flatter, but doesn't go the whole way - the removal of bands would complete the transition.

UKIP wrote in their election manifesto of a simple, one rate/band, flat tax but didn't detail the rate they would set. Whatever the rate is would have to cover a vast range of incomes.

Currently taxes are progressive, split into 3 bands, well 4 actually, if you include the starting rate for savings. Each band has a different tax percentage and income is split into bands after personal allowances are taken into account. Apart from Income Tax, there is National Insurance, which is itself split into up to 3 bands, but these are not at the same points as income tax. Dividends and Self Employments are themselves difference still.

It's no wonder we have the most convoluted tax system in the world. Our tax calculators go someway to helping to unify the calculation of these taxes in a simple manner and putting them together was extremely complex - try them here.

How would a flat rate system help?

Complexity costs money. Someone needs to make sense of all the regulations, rules and calculations - this means clever accountants. For big business, this means a legal team specialising in tax law - possibly searching for loopholes within the rules. Simplifying the tax system would remove the possibility of over-complexity exposing mistakes and freeing up money spent there into other areas of the economy.

Is tax really that complex?

For business it seems tax needs to be complex because business is complex - and determining what should and should not be taxed requires a more in depth tax code. People would argue, and would be correct, that the easy part is the calculation after figuring out what to tax to begin with.

Do a small proportion of people really pay the most tax?

This is true, nearly 60 percent of all tax is paid by the top 10th percentile of taxpayers. This reason is because due to the way tax is split in to basic, higher and top/additional bands, at 20, 40 and 50 percent respectively, the more you earn the more tax you pay. If a flat tax system were to be applied, people in this percentile would have the most to gain - possibly more than 60 percent of the income of the country.

I could make a better tax system!

With all the bands, rates and rules it's difficult to get a comparison going, but try our custom tax calculator for 2013/2014 here, you can create your own tax rates, allowances, percentages and more - then compare that with what the Government has set for 2013.

Would A Flat Rate Tax For The UK Work?1 views

Would A Flat Rate Tax For The UK Work?160 views